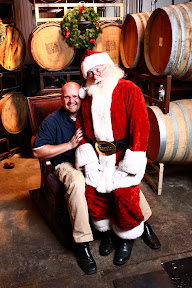 Here in San Diego, even when it’s supposed to be Christmas time, it rarely truly feels like Christmas.  In December each year, other parts of the country, throw on their best Christmas sweaters and sing about how the “weather outside is frightful.”  Us, we head for the beach and roast Marshmallows (not Chestnuts) by a bonfire.  Yet, each year we at Port Brewing and The Lost Abbey do our part to support seasonal beers with the production of not one but two Christmas beers- Santa’s Little Helper and Gift of the Magi.

Last August when we produced the 2008 Santa’s Little Helper Imperial Stout, we put a plan in motion to age a portion of the batch in Bourbon Barrels for a Christmas in July promotion that I wanted to do at the brewery.  Last weekend, we had another kick ass event at the brewery (thanks to all of our volunteers who supported us)!  There were great new beers in bottles and on tap (including the first release of Duck Duck Gooze).  Chef Vince of course whipped up some amazing pizzas and The Professors sounded as tight as they could in a brewery environment.  Santa Claus even paid us a visit.  All told, it was a great event for the patrons of Lost Abbey.

But what truly made the event memorable was the overwhelming support that we received for Toys for Tots.  As part of our Christmas in July promotion, we asked attendees to bring one unwrapped toy (valued at $15) in exchange for entrance to the party.   I must say that I was blown away by the generosity of our people and clearly they understand that together we can make a difference.  We raised over $10,000 worth of new toys from this event.  Those who didn’t bring toys were asked for a cash donation and $1,500 was sent to the Toys For Tots Foundation as well.

It gave me goose bumps on Saturday night to stand next to all the great toys that we collected.  It meant an awful lot to me that we were able to take something (like beer with the associated stigmas) and do great work for kids. 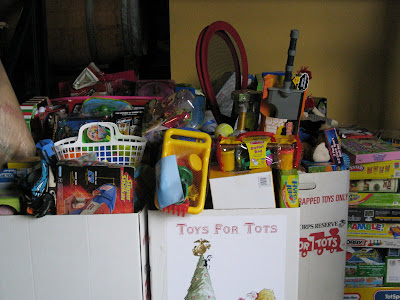 Just a few of the bins of donated toys

I know that beer and children can be very taboo in our society but if you look at what we accomplished this weekend, I know this is not always the case.  Personally, this was an incredibly gratifying and rewarding day.  Many children will need help in order to celebrate Christmas this year.  Knowing that our beer brought so many people together for this cause is an exceptional feeling.

So, to everyone who was there on Saturday and gave a little bit to help brighten the Christmas morning of so many children, I say thank you!  Christmas in July has landed here at Port Brewing and The Lost Abbey and will remain on our calendars each year from here on out.